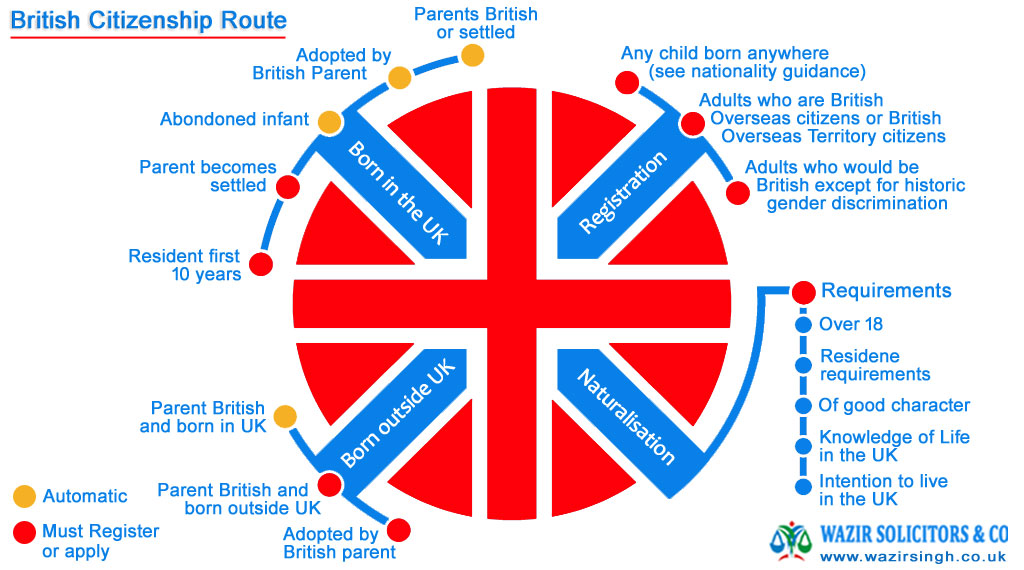 There are three main ways of becoming a British citizen:

Naturalisation is the legal process by which a person changes their nationality. For hundreds of years, foreign nationals living in the UK, and sometimes living abroad, have been able to attain British citizenship through naturalisation.

The criteria and process have changed over the years but for successful applicants the end result has been the same: that person is granted the same legal rights and status of a natural-born British citizen.

Not married to British Citizen:

If you are not married to a British citizen but you needs to show that you are free from any immigration restrictions for at least one year before applying for naturalization as a British Citizenship.

Requirements for Naturalise as a British citizen:

The main requirements to naturalise as a British citizen are that the applicant must be:

Length of Stay in the UK

You also need to meet the following requirements for the last five years:

Before applying the naturalisation as a British Citizen, the applicant need prove that he or she is legally settled in the UK and is free from immigration time restrictions.

You need to provide the following documents as evidence in support of your application for naturalisation as a British Citizen:-

Identity documents, either:
Knowledge of Language
Life in the UK Test

Evidence of Lawful Residence in UK during the last 5 years:

Evidence of freedom from immigration time restrictions (such as ILR permission), either:

Evidence of marriage for applications made on the basis of marriage or civil partnership to a British citizen, both:

Evidence of Tax for self-employed applicants only:

Evidence of Tax for self-employed applicants only:

For more information and detailed advise, you are welcome to write us at info@wazirsingh.co.uk or speak to UK Solicitors at +91 947 852 6909.

Have a query or want to discuss a refusal case with UK solicitor?